Cuban Pete drops the Renaissance Man mixtape on today, his birthday, as a gift to everyone who has stuck by him throughout these last few years.

The title takes its name from Cuban's first interview proper by DJ Iceman for Rhyme Junkie.

It wasn't until several months later that it was pointed out that the title and cover may have been subconsciously influenced by Hell Razah (who did a project called Renaissance Child), the head of GGO of which Cuban is part of. Which is why Cuban asked Razah to do the intro for the project.

Some people have already referred to it as AOTY so take a listen and decide for yourself. Whatever you think of it there is no denying it's a strong project with no skipping.

Each track has separate artwork (included in the download from the C75 Live bandcamp site only) so that each artist and track gets the shine it deserves.

Physicals are available on CD and are limited edition with only 75 being produced. 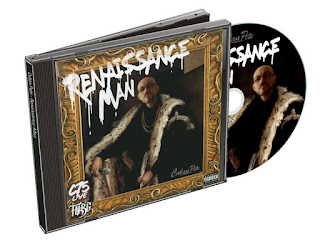 Stream the project below and download/order physicals HERE:


Watch the first video that was done for the project 'Spoils Of War' below: