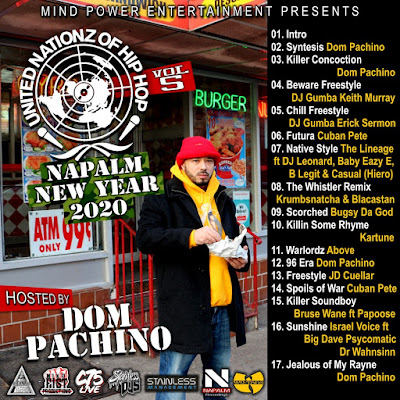 Mind Power Entertainment drops Vol 5 of the United Nationz of Hip Hop series.
This volume is hosted by former Killarmy member Dom Pachino who makes it a Napalm New Year, introducing tracks from himself, Krumbsnatcha, Cuban Pete, Erick Sermon, and many more.

Check out the mixtape below or HERE

Also on Datpiff and Audiomack


Dom Pachino a.k.a. PR Terrorist is known for his success as a founding member of the Wu-Tang affiliated group Killarmy, which sold collectively over 500,000 units worldwide. He appeared on Platinum and Gold albums such as Wu-Tang Clan's “Wu-Tang Forever” as well as “The Swarm” and "Bobby Digital in Stereo." He has three successful world tours with the Clan and two solo arranged by the man himself

His latest album 'T-3 (The Killer Concoction)' is the third installment of his Tera Iz Him series.

Get the album HERE
and check out the official video for Its So Hard below: