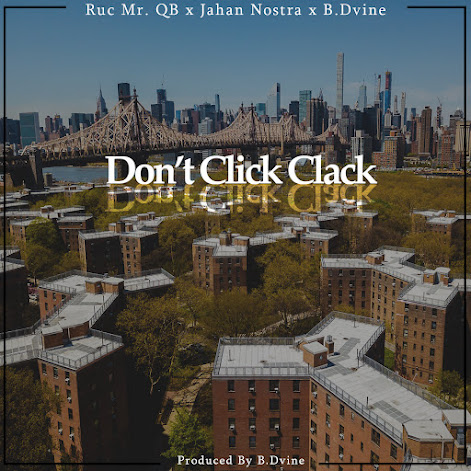 Award-winning recording artist Jahan Nostra is back to business with new music. The East Coast-based artist has been steadily building his fanbase and watching his music take flight to various parts of the world, and is gearing up for more expansion in the new year. With the holidays around the corner, Jahan Nostra makes a connection with some of the best on a new track entitled “Don’t Click Clack”.
Jahan Nostra teams up with some of the tri-state area’s best lyricists on “Don’t Click Clack”. Jahan joins Queensbridge emcee Ruc, and Long Island producer/lyricist B.Dvine on a track that displays the potency in their artistry, their ability to handle any beat thrown their way, and the unity that is sometimes missing in hip-hop music.
B.Dvine lent his heavy-hitting production prowess on “Don’t Click Clack”, making for a song that is guaranteed to rattle speakers around the world, placing three emcees further up the ranks who will inspire new generations of artists. Ruc, also known as Ruc Mr QB, was a member of the Killa Kids collective in the 90s and has collaborated with the likes of Nas, Cormega, Mobb Deep, Capone and former NBA star Metta World Peace.
B.Dvine has been an active member in Hip Hop for decades as he produced for the likes of Tragedy Khadafi, Kool G. Rap, and Method Man, and as an emcee has collaborated with the likes of Conway The Machine, Havoc of Mobb Deep, and has opened for Dave East and the late DMX.
Jahan Nostra continues to show that good music will prevail no matter the circumstance, and a dedication to the craft is still alive in a time where everyone’s following the latest trend. In addition to the new single “Don’t Click Clack”, Jahan is finalizing the track list for his upcoming EP, Violet Skies along with making plans to hit the road for a promotional campaign.
Spotify Apple Music    Tidal  Bandcamp

Jahan Nostra is an emcee who grew up between Stamford, Connecticut and Mount Vernon, New York. He pursued a career as a Recording Artist in his teens, signing with BMX Entertainment in Brooklyn, NY. Since 2012, he has released several albums, collaborated with the likes of Smif-N-Wessun, Tahmell, REKS, and Tone Trump, opened for numerous artists including Ludacris, T.I., Griselda,  Cappadonna (of Wu-Tang), and has won several awards from the likes of the Hip Hop Film Festival, Urban Mediamakers Festival, and the NYC International Infest Festival.