WHO ARE THE EAST COAST KILLA BEEZ???

As a tribute to The Wu-Tang Clan, the all-time legendary Hip Hop group founded in the 1990's, a league of established affiliate artists have come together and formed the much acclaimed, East Coast Killa Beez. They all came together in Brooklyn, New York for a project for the late great Ol' Dirty Bastard, and in the midst of working on the project, despite different styles and genre's of music, they all bonded together. The members of ECKB are... 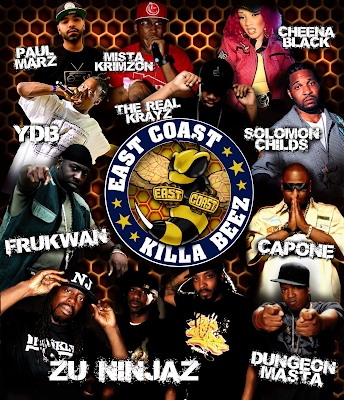 Frukwan (aka The Gatekeeper, from the iconic group The Gravediggaz) is a pioneer in the genre of Horrorcore Hip Hop/Rap. He is also known as a member of legendary Hip Hop group Stestasonic.

Representing 10th Chamber/Brooklyn Zu/ Dirty Clanzmen, under Popa Wu Records, is the Wu artist and producer Dungeon Masta. He has released a series of projects through his own label called Sohlo-Pro Records/ Chambermusik Special Products and has toured with Wu-Tang Clan General, Cappadonna.

Zu Ninjaz are The 5 Foot Hyper Sniper, K Blunt and Popa Chief. The group was Founded by Old Dirty Bastard, and they released there album '' Now Justice '' in 2005. Each member boasts their own rhyming style and unique image, yet together their sounds blend perfectly into one awe-inspiring clique.

Solomon Childs is a Staten Island artist, backed by the RZA along with his brother Divine (CEO) of  Wu Music Group. A close associate of Cappadonna and Remedy, he was once part of Theodore Unit (under the moniker Killa Bamz)  before going completely solo. and has continued releasing albums with features by numerous affiliates, as well as forming his own label.

Young Dirty Bastard is Ol' Dirty Bastard's eldest son. He toured with the Wu-Tang Clan during their 2007 tours. Under the guidance of his uncle, the RZA, he has already recorded 3 mixtapes and his first album in 2011 entitled Food Stamp Celebrity Vol. 1, carrying on his father's legacy.

Capone, hip hop recording artist from Queens, New York City. He is best known as one half of the East Coast hip hop duo Capone-N-Noreaga (C-N-N), alongside friend and fellow Queens-based rapper N.O.R.E.

Paul Marz is an Egyptian-American emcee hailing from Staten Island. His debut album "Sword of Sound" was released in 2012,  and has his latest project 16"s For Dummies completed to great reviews.This upcoming Emcee has a true love for the game by giving back, he's associated with running and hosting an upcoming BATTLE LEAGUE called Beast Mode.

Cheena Black Monrow, is a Hispanic American singer-songwriter, recording engineer and graphic designer. Cheena Black has been playing her craft as a hip-hop, rnb and soul singer from the streets of Brooklyn since the age of 5. Cheena joined forces with Brooklyn Zu in 2006, and in 2008 she did an unreleased song with members for her solo album.

Mista Krimzon was born in Long Beach, raised in Compton, and is now residing in Las Vegas. He has made a name for himself on the underground hip hop scene in Las Vegas, earning many awards as well including a Hip Hop Legend Award, and acquiring the name “ The Voice of Sin City”.

The Real KrayZ is an R&B singer, hip hop vocalist, and rap artist, native from Las Vegas, NV.. He is a 7X award winner, 5 of which were awarded from the Black Music Awards Association. Also known as "The Prince Of Vegas" or the "RnB Prince Of Vegas", He is also an online media show host, and an extreme athlete in BMX Racing.

LOOK OUT FOR THE FIRST SINGLE AND VIDEO COMING SOON 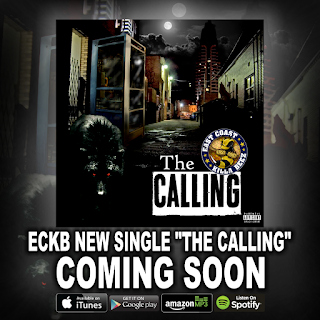