Hanz On and Method Man dropped a new single '1,2'
over a B.Dvine banger yesterday.

The date was pulled forward, after initially being pushed back, due to Method Man spitting his verse on Sway in the morning, in a crazy cipher with Black Thought of The Roots, that had the internet going nuts.

The track is from the upcoming collab project between Hanz On and producer B.Dvine titled  'Hanzarelli'.


Artwork for the project was handled by C75 Designs 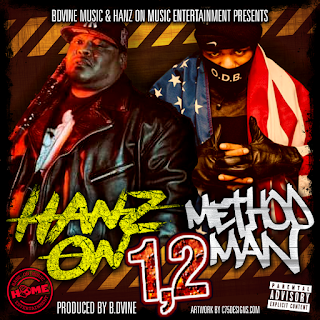 Peep the Method Man cipher with Black Thought on Sway below:


Producer B.Dvine has dropped a mixtape, hosted by J-Love, that features some of the many tracks he has done beats for. Featuring artists such as Blaq Poet, Comet, Tragedy Khadafi, Kool G Rap, Killa Sha, Solomon Childs, J-Love, Meyhem Lauren, and many more.
Stream the album on Spotify.

If you need beats for your project then check out some of his latest on his site bdvinemusic.com
To contact about beats you can hit him up on Facebook or email borndvine2010@aol.com.