Cesar Comanche & Poe Mack – A Promise Not To Sting 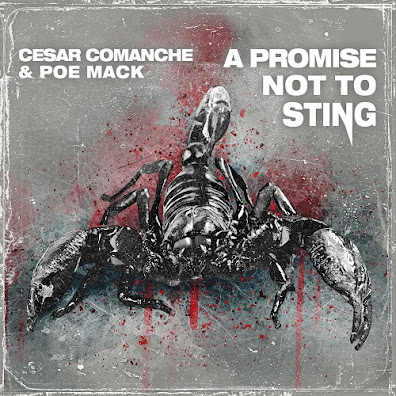 Cesar, originally from Jacksonville, NC, began writing rhymes in 1994, but didn't pursue rhyming as a career until 1996. That same year he met budding producer and schoolmate 9th Wonder. Since then he's released 9 albums toured 14 countries, plus sold records worldwide since 2000.

On this release he hooks up with Emcee/Producer/DJ/Promoter/Audio Engineer Poe Mack.

Poe was born into a musical family. Poe Mack began focusing seriously on his rap career in 2003, and to date has completed multiple tours spanning 15+ states. While living in his passion and love for hip hop Poe Mack always makes it a point to give back to his surrounding communities in multiple charitable ventures.

Get their joint album 'A Promise Not To Sting' HERE and check out the video for the first single 'STILLBORN' below...