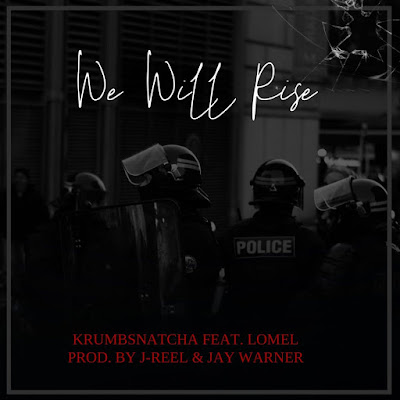 In light of the recent events that have effected the world community; 'We Will Rise' addresses the unrest, inequality and injustice rampant in the world today with a ray of light within the track's title. Hip Hop veteran Krumbsnatcha aka Judah Tha Prince pairs with upcoming crooner, Lomel, to score a vibrant record that echoes the sound of the time. A mix of the current chart topping AfroBeat-Dancehall sound fused with Hip Hop and Soul, the track commands an instant head nod from the beginning as Lomel enter smoothly singing:

"They wanna stop us but we will rise. Gained strength from years under pressure. They tried to break our will and take our pride. We're to strong we won't let them."

Krumbsnatcha delivers his social commentary with lazer beam accuracy while providing a flow and cadence that easily meshes with the production. The message is simple: The people for change and equality  for all races of people. This song serves as a rally cry for all the protestors and those unlawfully persecuted.

J Reel and Jay Warner, an upcoming production duo based in North Carolina are credited with the creation of the flavorful track. DJ Intrigue, who has worked with Krumbsnatcha on several projects including his album The Key released in 2015, and Wu Tang Clan's Cappadonna delivered the fine tuning as the track's engineer.

Stream below and stream/save HERE


Check out his latest interview with DigBoston HERE