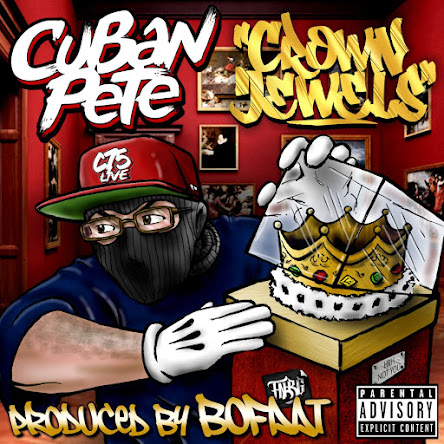 Cuban Pete sees out the year with ne of his strongest releases to date 'Crown Jewels' produced by the ever hardworking Bo Faat.

The opening track 'For The Gram' sees Cuban laying down some honest, and sometimes amusing, lines about the rap game.

This is followed by former Kool Keith prodigy Dane Uno trading bars with Cuban on 'Hall Of Fame'.

Regular Bo Faat collaborator, and Drunken Monks MC, Marz One pops up on 'Raise The Dead' where the MCs address the demons that surround them.

'Cut n Paste' is a solo joint that sees Cuban addressing the practice of rappers putting together cut and paste fan albums of features they've bought of dead or alive MCs, either to fulfill bucket lists or just for clout. Although Cuban works with a lot of artists, and has a lot of features on this project alone, he has always taken pride in having established relationships with those artists and helping each other build.

Ghetto Govt Officialz head, the legendary Heaven Razah (fka Hell Razah of Sunz Of Man), jumps on 'Hard 2 Smile' which sees bars of truth from both MCs on the world today. DJ E.Rex, aka Mr Scratchhook, is on hook duties.

'Seesaw Balance' is a collab with upcoming group Grimewav. Members Enels (who also mixed and mastered the track), Hanzo Bladez, and the recently freed Mo Rukuz, join Cuban for a no hook slice of dopeness.

'Burn', featuring Dro Pesci and DJ E.Rex on the cuts, was previously released as a single but is offered up here as a bonus track to commemorate the first real collab between Cuban and Bo.

Check it out below: