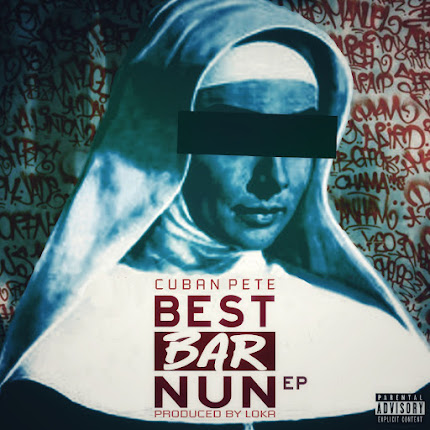 UK based Hip Hop artist Cuban Pete is an Emcee in the truest sense who has  amassed a colossal back catalogue over the last few years including  collaborations with industry icons; Erick Sermon, Krumbsnatcha, Blaq Poet & Tragedy Khadafi as well as home-grown UK artists such as Ramson Badbones, Arise King David & Trademark BLUD and more recently Loka on the brand new Best Bar Nun EP.

Loka is an Artist/Producer based in  Leicester who's has managed to accomplish some remarkable things in such a short period of time, such as performing at O2 Islington (LDN) & touring his debut album '01.02.98' across the UK & within Europe.

Best Bar Nun is a dose of Boom Bap in its purest form where Cuban Pete spearheads the attack on wack rappers, haters and imitators in uncompromising style.
Over the 4 tracks 'Best Bar Nun' is pure poetry, spat with potency, packed and delivered perfectly over a variety of production styles bestowed by Loka.

'Once again, Cuban Pete displays his skilfully crafted lyricism and wordplay without disappointment. The UK Hip Hop sensation, without sounding cliché, keeps it real and thorough and has a knack for unifying his music with the best of the best production and DJs to deliver gems that not only accentuate him sonically but resonate and echo.' –  TheWordIsBond

One reviewer online gave it 4 out of 5 mics "as the Production, lyrics, flow and features are all dope.".Listeners have all claimed different tracks as their favourites, with most saying their favourite changes each listen, pointing to the 'no filler' aspect of the project.

Take a listen and decide for yourself. Look out for official videos coming soon. The ep is available to stream on all major DSPs but please go and support by buying the digital, CD, and merch, straight from the official site...