Get To Know: CP Charm aka CMP

CHRISTOPHER M POWELL is a young man with a love, passion and desire for music.
He is on a mission to break into the music industry as a new and innovative talent.

CMP started out as a rapper and then ventured into singing. He is a former member of the hip hop group Stray Bullets, with who he performed at parties, colleges and talent shows throughout the tri state area. 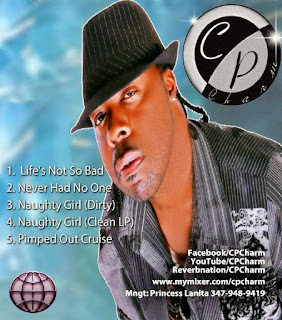 CMP then crossed over to RnB where he was a member of an RnB group called True To Life. Their name was later changed to Hood Harmony before the group went their own separate ways. CMP then went solo and kept his grind on.


Although he later changed his name from CMP to CP Charm, for marketing reasons, he will always be the artist known as CMP. When he spits his rhymes he's a force to be reckoned with.

He is currently releasing two singles; 'Never Had No 1' followed by 'Cam Corder'.
Watch out for this long term artist  dropping his singles on line and in stores very soon!